Malware… Coming Soon to an Android Phone Near You!

There have been a plethora of news stories lately about the increasing threat of computer viruses and malware. One computer attack that has been getting a lot of press lately is called Cryptolocker, in which a Trojan attacks a computer that is running Microsoft Windows. The Cryptolocker malware then encrypts data files and demands a ransom be paid for the files to be decrypted.

But are cellphones susceptible to similar attacks?

Well, it turns out that attacks like Cryptolocker are already happening across every Android device.

ESET, a popular antivirus software company has found that malware for Android devices has “increased more than 60% between 2012 and 2013. This trend is predicted to continue in 2014” (Waugh, 2014).

One malware program that is growing in popularity is called Koler. Koler looks similar to Cryptolocker in that it demands the user pay a fee to get back control of the device but, despite its claim, Koler cannot encrypt your phone. So if you see an image like this on your phone, don’t panic, and don’t make any payments. No matter what’s on your phone. 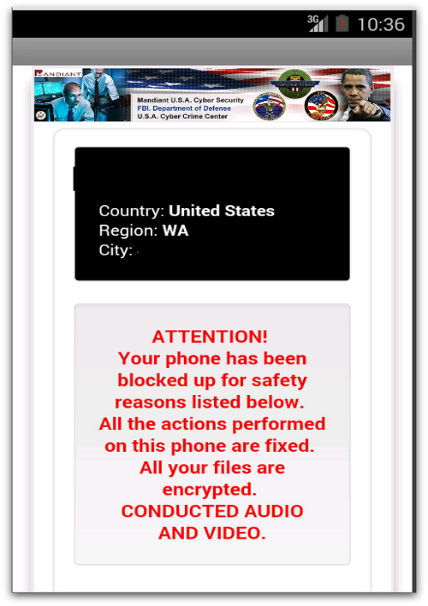 If you get the Koler malware, there are plenty of ways to try and remove it from your phone. One way to defeat this malware is to try and simply reboot your phone (Arellano, 2014). If that doesn’t work, go to your settings and then apps. Try to find the app that caused the malware and uninstall it (start with the most recently installed and repeat the process until the malware is gone).

If that way does not work for you, try to boot your phone into safe mode. There are many ways to boot into safe mode and it depends entirely on your device, so if you need help booting into safe mode, start with Google and YouTube. When you boot into safe mode none of the apps you downloaded will start, so the malware will not be able to run. Once you are in safe mode, go back to your settings and the apps. Remove the app that caused the malware. If you are not sure, start with the most recently downloaded app. When the application is removed, restart your phone and see how it works. Repeat this process until the Koler message is off your phone. If all else fails, do a factory reset and start over.

Unfortunately there is another malware program that is also gaining momentum in the cell phone universe and it’s called Simplelocker. And from the looks of it it’s a little more serious than Koler. Simplelocker actually does encrypt your data. There are more than 30 known variations of Simplelocker and that number is expected to grow. And while Simplelocker is not too common in the United States right now, it’s only a matter of time before Simplelocker, or a version of Simplelocker, makes its way stateside.

This is a screenshot of the dreaded Simplelocker: 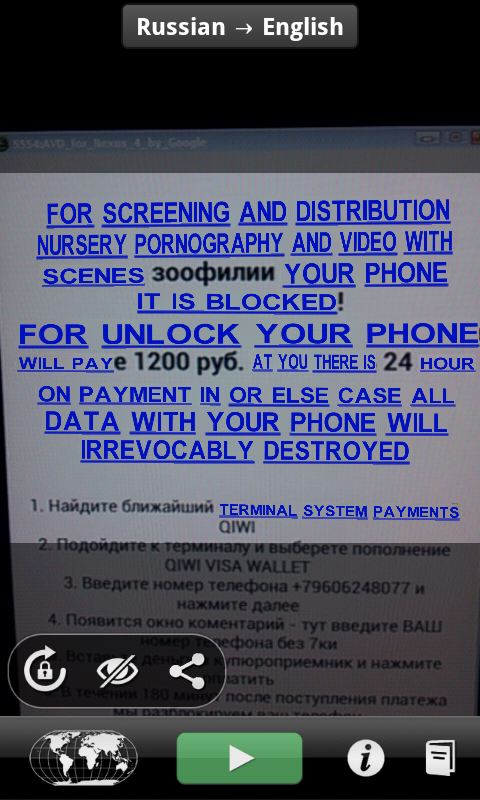 If your phone is infected with the Simplelocker malware you have a few options. You can try rebooting your phone and go to settings then apps and remove the most recently installed applications. If this does not help, you can also try a factory reset of the phone. This will take the phone back to the way it was when you first got it. The downside: you will lose anything on the phone that is not already backed up. Regardless of how you get the malware off your phone, the very next application you install should be an antivirus program. Download that and run it right away.

Should I really be concerned about my phone getting a virus or malware?

According to March 2014 survey by TechRepublic, Android devices account for nearly 80% of the cell phone market share (Forrest, 2014). With that many users, it was only a matter of time before cyber-criminals started targeting Android devices. In a 2012 study, Kaspersky Lab found that 99% of mobile malware was designed to run on the Android platform. The most popular Android device on the market now is the Samsung Galaxy S3, but with new phones being released on a regular basis, it’s only a matter of time before that title is passed to another device.

So what can I do to protect my phone?

Fortunately, there are many ways to help protect your phone from becoming just another victim of cyber-attacks. The easiest way to protect your phone is to never download applications from anywhere except a legitimate app store, like Google Play.

Next, make sure your phone is backed up just like you back up your computer. Save your pictures and contacts to places other than your phone. You can sync your phone with your email account and there are plenty of third party apps available if you really want to make sure your data is backed up. Just make sure you get one of those apps from the Google Play store!

Another way to make sure your phone is protected is to have an antivirus program installed. There are several available to pick from. Lookout is a popular choice and offers a free version or a paid one. Norton also has an antivirus program and there are many others in the Google Play store. One thing to remember about antivirus programs; they need to be updated regularly to be effective. New viruses and malware come out all the time, so the antivirus program won’t do any good if it is never updated.

Take care of yourself and your phone. We don’t want you to become just another (cyber) victim.